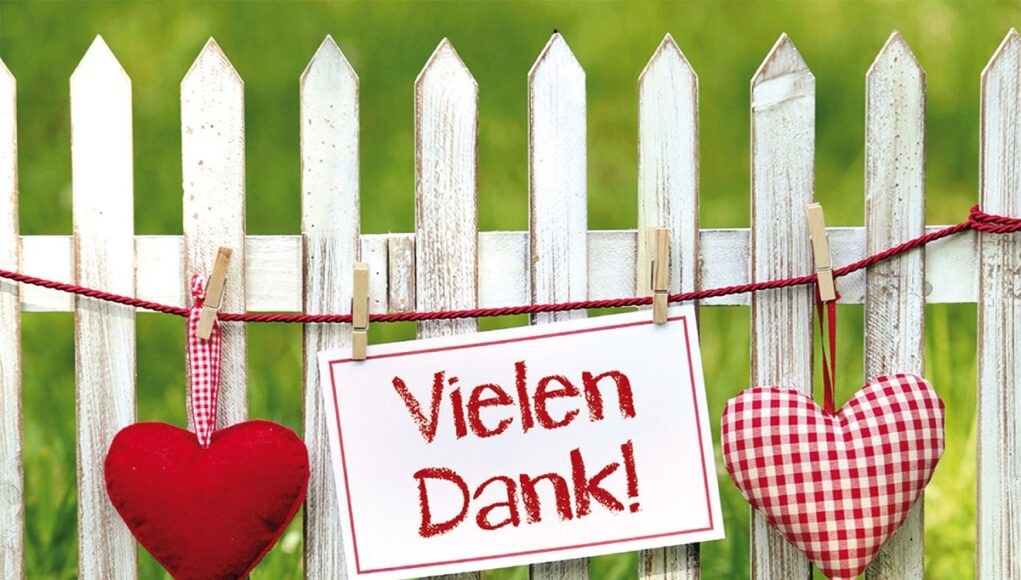 Do you want to know how to say thank you in German? Today’s topic is German etiquette. More specifically, how can you say thank you in German based on the social situation, level of familiarity, or topic of conversation? When the situation calls for it, we all know that a simple “thank you in German” (Danke!) may do wonders. It is more than courteous to express gratitude in a foreign language; it is a gesture of respect for the culture and country you are visiting.

One of the first things we were taught as children was to say “thank you” to others – “say thank you for the chocolate to the good gentleman!” That is something we all remember! Learning German – or any other language – differs very little from learning to speak.

You begin with the fundamentals, such as thank you and welcome, then progress to more advanced terminology, such as variations of the same expressions you already know. There are numerous ways to express thanks in English. “Thank you,” “thank you a lot,” and “I’m forever grateful to you” are just a few examples. The German language, of course, is no exception. Let’s learn the greatest methods to express gratitude and thank you in German.

How to Say Thank You in German?

When conversing with Germans you don’t know, politeness will get you far. “Danke” is the most basic way to say “thank you” in German (DAHNK-uh). However, as with other languages, there are several methods to express thankfulness depending on the context. You should know how to say “thank you” as well as how to respond appropriately when someone appreciates you for something you’ve said or done.

23 Sincere Ways to Say “Thank you in German” 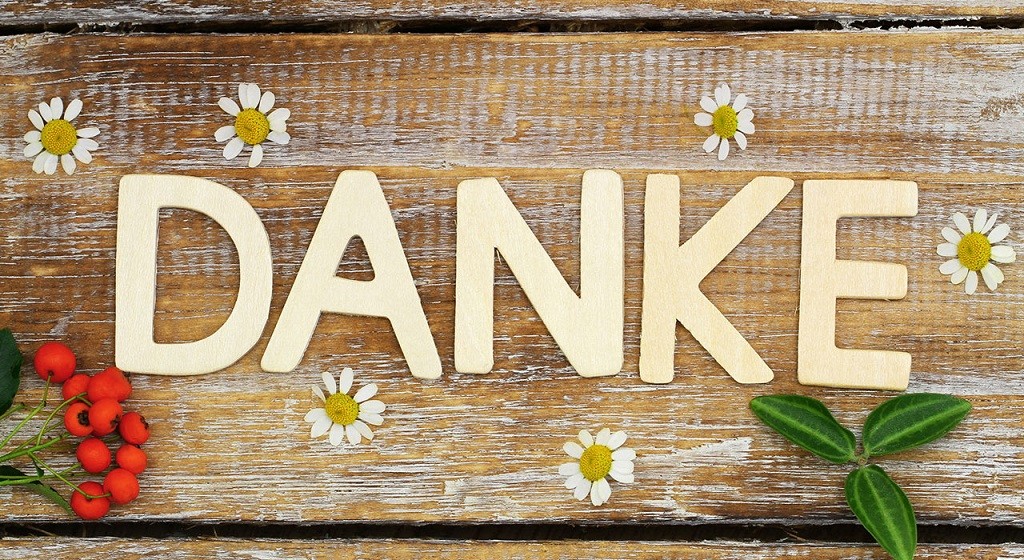 Depending on the situation, you can say Thank you in German in a variety of ways. However, it is critical to understand when and how to utilize each phrase. What makes this language fascinating is that you cannot thank someone in the same way on paper and orally. The same is true in official and informal settings. As a result, we’ll go over some of the most frequent ways to express gratitude. By following this people can know how to say Thank you in German.

Let’s start with the fundamentals. Danke is the German word for “Thank you.” This is most likely the most prevalent way to express gratitude in German. As a result, it will be useful in a variety of scenarios.

But, because simply saying “thank you” is a bit generic, I’d want to show you a few words you can add.

When speaking to a single person, this term is used. You might say this in private to someone who has assisted you with a work presentation or who has been emotionally present for you during a difficult period. However, it can also be used in lighter scenarios!

“Danke schön” and “danke sehr” are more formal expressions. These two expressions are more commonly used in business or to convey thanks than the simpler and shorter “Danke.”

Danke schön has no direct translation because schön means lovely. The German word can also mean nice, and when paired with Danke, it signifies you’re saying thank you in German in a nice or courteous manner.

Do you recall a time when you were extremely grateful to someone for their assistance? That’s the perfect opportunity to say “Vielen Dank!” in German.

Herz is the German term for heart, thus you can use herzlichen Dank to express your thanks as originating from the heart. You could also conceive of it as ‘heartfelt gratitude.’

7. “I Would Like to Thank you Sincerely” – Ich möchte mich recht herzlich bedanken

This formal statement is ideal for a formal circumstance or a professional context. Herzlich means “heartfelt,” and it is an adjective that amplifies the impact of a standard German thank you.

Indeed, this statement contains a sincere tone that is acceptable to utilize when the person you’re dealing with has gone out of their way to assist you.

Tausend Dank literally translates to “a thousand thanks.” It’s the least formal of the “thank you very much” phrases given here, but it’s still appropriate to use with coworkers or anyone with whom you have a close working relationship.

9. “Thanks for Everything” – vielen Dank für alles

Don’t you think you can figure out what beste means? Would knowing that gut means “good” and besser means “better” help?

Danke, das ist nett translates as “Thank you, that’s nice.” It’s a wonderful way to express gratitude to someone who performs your favor or goes out of their way to assist you. When you drop your wallet on your way out of the supermarket and someone picks it up and returns it, thank them.

That’s right, beste means “best,” and besten Dank means “best thanks!” – not something we’d say in English, but a useful term in German.

Sometimes the context necessitates a few extra words. Ich Danke Ihnen translates to “I thank you,” and it’s something you might say along with a handshake when you’re indebted to a stranger or acquaintance. You can also use it to express your appreciation for someone’s assistance.

13. “Thank you, That’s Very Kind of you” – Danke sehr aufmerksam

Actually, the word Danke is optional in this statement because sehr aufmerksam can be used in polite discourse without the word Danke.

This statement, literally translated as “that’s extremely attentive of you,” can serve as an example of how to say thank you in German without using the standard Danke. When someone performs you a favor, this is the appropriate answer.

There may be times when you need to ask someone for a favor. If you know the other person will most likely assist you and want to convey how appreciative you will be, you can say “thank you” ahead of time.

The most common German word for this is “Danke im voraus” (thanks in advance). It is widely used in correspondence, for example, to thank someone in advance for their response.

“Noch mal” or “nochmals” implies “once again.” After you’ve already shown your thanks, use this phrase to thank someone again in German.

The following one on our list may be utilized even more frequently than the first two. Vielen Dank is German for “many thanks,” and it is the standard way to express gratitude. This can be combined with the previous entry to say “Thank you in German”: Ich Danke dir vielmals. It can be used in a variety of contexts, both formal and casual.

This is also a whole statement, but it has a more formal ring to it than Ich Danke Dir/Ihnen. When you receive payment for a product or service you sold, you could use Ich bedanke mich. The other individual would respond, “Ich danke Ihnen.” In German, the word “thank you” is rarely used among friends.

18. “I am Very Grateful to you for” – Ich bin Ihnen sehr dankbar für

Last but not least, add what you are thankful for at the end of this customary statement. However, only use it with intangibles, such as “I appreciate your assistance,” and not with objects. Here’s an illustration: In German, “I’m grateful that you look after me” would be “Ich bin Ihnen sehr dankbar dafür, dass du dich um mich kümmerst.”

This indicates I’d like to express my gratitude. Consider someone who gives you a ride. What do you say once you get to your destination? This phrase would be great under these conditions.

Here’s one you’re unlikely to hear on the German mainland. It is most typically heard in Austria and southern Germany, which have historically been Catholic and whose religious past may still be heard in the local accent.

While it truly means “thank you,” you can’t deny that it has some weight to it. Segne es Gott is a common answer to this remark (Bless it, God).

This sentence may seem and sound the same as the previous one, but due to the overlap between third-person plural and second-person formal pronouns, it can also imply “I thank them.”

“Danke für die schöne Zeit” (DAHNK-uh fewr dee SHUHRN-uh siht) translates as “thank you for a great time.” It’s appropriate for a date, as well as any other occasion where you were taken to something, such as dinner or a performance. This phrase is also appropriate for performers or entertainers who put on a show for you.

Gleichfalls translates as “likewise” or “the same to you.” If someone thanks you with a danke, you can react with danke, gleichfalls to acknowledge their gratitude while also thanking them. “Thank you in German as well!”

Frequently Asked Questions (FAQs) about Thank you in German

Is Danke Schoen Thank you in German?

If you really want to express your appreciation, “Danke schön” is the most typical way to say “thank you very much” in German.

Is Danke Formal or Informal?

Danke (“thanks”) is the most popular informal way to express thank you in German! Danke is the German word for “thank you.” It’s an excellent “thank you” to use with friends, family, and peers (whether coworkers or peers by age).

How do you respond to Danke Schoen?

What are the appropriate reactions? The traditional answer to someone saying Danke is bitte. This generally means ‘please,’ but when responding to a ‘thank you,’ it signifies ‘you’re welcome.’ If they instead say danke schön, you should respond with bitte schön.

Is it Rude to say, Danke?

“Danke”/”Bitte” is absolutely acceptable. It’s not harsh or strange; it’s just less impassioned and formal than the longer forms.

Can Bitte Mean Thank you?

Please signifies much more than “please” or “you’re welcome” in German. In some aspects, it’s similar to the word “forgive.”

Do you tip in Germany?

In Germany, there is no hard and fast law about how much to tip. As the German name for tip suggests, the normal habit is a nominal tip (Trinkgeld, or money for a drink). Many people simply round up to the next euro or add a few more euros, which is entirely okay.

How to Tell if Silver Jewelry is Fake?

What is JoinPD? Everything You Need to Know about it in 2022

News Editor - December 23, 2021 0
With the advent of technological advancements on a daily basis, cloud computing is among the latest technologies that are growing rapidly. As per Oracle's...