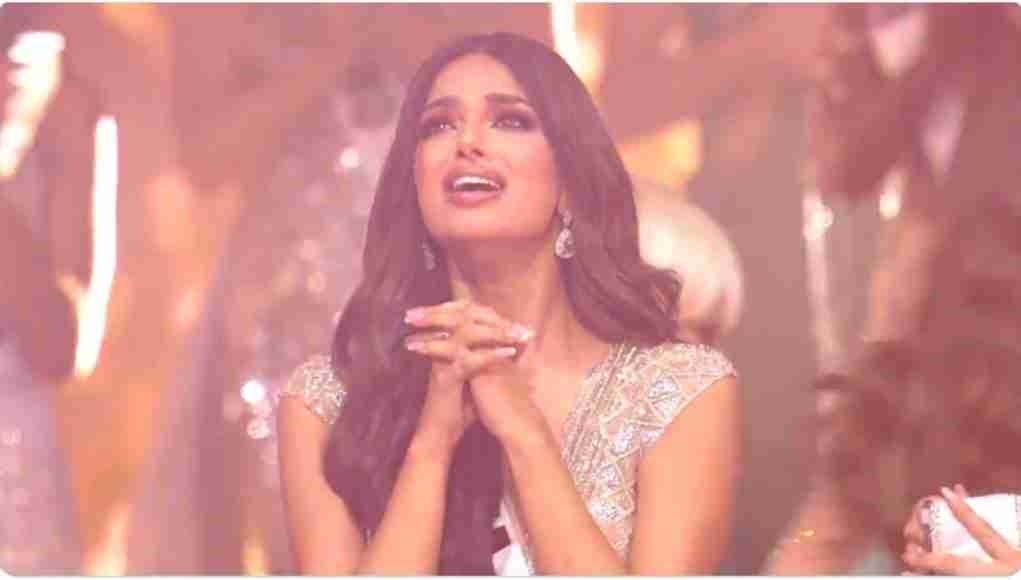 Only two Indians have won Miss Universe before Harnaaz Sandhu: actresses Sushmita Sen in 1994 and Lara Dutta in 2000.

“I am eternally grateful to the Almighty, my parents, and the Miss India Organization for their guidance and support.” “Many thanks to everyone who prayed for me and wished for the crown,” Sandhu added.

“Bringing the magnificent crown back to India after 21 years is a source of immense pride,” she remarked. Sandhu was asked during the last round of questions and answers what advice she would provide to young women on how to deal with the pressures they face today.

“The most significant strain on today’s young is to believe in themselves, to understand that they are unique and that this is what makes them attractive.” Stop comparing yourself to others and instead focus on the more pressing issues that are affecting the globe.”

“This is what you must comprehend. Come out and stand up for yourself because you are the boss of your own life and the voice of your own people. To thunderous ovation, she continued, “I trusted in myself, and that’s why I’m standing here today.”

Sandhu received congratulations from everyone, including Lara Dutta, who welcomed her “to the club.” “Way to you, @HarnaazSandhu03!” Hello and welcome to the club. This has been 21 years in the making. You make us incredibly proud. “A billion dreams have come true,” Dutta wrote on Twitter.

The pageant this year featured typical demonstrations of national costumes, evening gowns, and swimwear, as well as a series of interview questions designed to assess participants’ public speaking abilities.

The introduction of the omicron variant, which forced Israel to close its borders to international tourists late last month, caused a last-minute glitch in the competition.

The majority of the Miss Universe contenders had already arrived in the nation when the new regulations took effect. Those who arrived subsequently, however, were granted special permission to enter, subject to a 72-hour quarantine period.

All candidates were tested for coronavirus every 48 hours in the days leading up to Sunday’s competition, and they were forced to wear masks.

Despite all of the precautions, Clemence Bottino, a candidate from France, tested positive for COVID-19 shortly after landing in Israel. She was declared virus-free last week after ten days in quarantine and allowed to return to the tournament.

Due to the pandemic, the pageant was postponed last year, and Meza was crowned in May for her brief reign.

Steve Harvey, a television personality from the United States, presented the competition on Sunday. The contest was scheduled to reach an estimated 600 million viewers in 172 countries via the FOX network, according to organizers.

Skincare Tips: How to Prevent Acne with Home Ingredients

What is JoinPD? Everything You Need to Know about it in...

News Editor - September 30, 2022 0
I love fashion. Let me repeat that, I Love Fashion! And one of my favorite things about it is the existence of staples. What...